Port Hardy As I See It 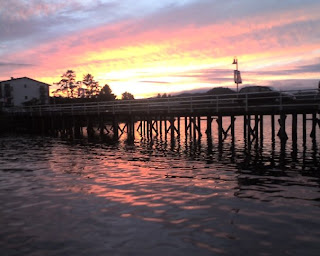 Port Hardy is a small town on the northern tip of Vancouver Island. Before I go any further I do have to explain the difference between Vancouver and Vancouver Island, because most people say "Oh, what's living in Vancouver like?"

First and foremost, Vancouver is a city of 2.5 million on the MAINLAND while Vancouver Island is that big ISLAND off the west coast of Canada. The city of Victoria is on the island, as is Nanaimo, Comox, Courtney, and Tofino. Port Hardy is nearly 700 km north of Vancouver!

Now let's get back to Port Hardy. Like I said, it's a small town of rougly 3500 people, yet it's the biggest town on the 'North Island'. It's part of what is called the Tri-Port Area, which encompasses the towns of Port Hardy, Port McNeill, and Port Alice. These towns are all within a 30 minute drive of one another yet they are all far removed from any cities.

Campbell River is the closest thing to a city, and it lays 250+ km to the south. You need to drive for 2 1/2 hours over a mountain range on a single-lane highway to get a cup of Tim Horton's coffee or a Big Mac...or purchase any clothes, or see a movie, or even eat at a decent restaurant!

Port Hardy itself is made up of the town and two outlying areas, Storie's Beach and Coal Harbour. Then there are three First Nations reserves surrounding the town. They are people of the Gwaksak'la band. Or the Gks'wa'llk' band, or something along those lines. There's a lot of Ws and Ks with apostrophes stuck between them. 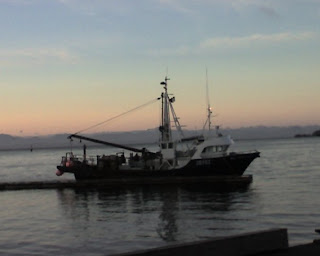 Port Hardy was founded on natural resources and national defence. Fishing, logging, and mining used to be the main job resource in the area, but 10 years ago the huge open-pit copper mine closed down and hundreds lost their jobs. More recently Western Forest Products (WFP) closed down its Port McNeill operations and many more people lost their jobs, leaving only the commercial fisheries to support the local economy. The fisheries have had a couple of bad years due to dwindling stocks, government mismanagement, and the slumping US economy, so the money that is there is just barely enough to support the region.

Despite all this Port Hardy holds its annual festival every July celebrating it's heritage. These are FiLoMi Days (Fishing, Logging, Mining). It's pronounced "Fe-lo-mee" Days, but lately has been jokingly referred to as "Blow-me Days" (although the odds of that happening in Port Hardy are slim).

When I first moved to Port Hardy the locals warned me about the cougars. There were apparently hordes of cougars rampaging all over the north Island, devouring unsuspecting cyclists from France (perhaps the French are a delicacy?). I was sufficiently petrified to not wander around at night but after a couple of years I realized that the cougars in question didn't inhabit the surrounding forests but the local pubs. After seeing some of these beasts of prey gyrating pitifully at the bar, sporting hairstyles from 1982 and enough makeup to audition for a role in The Evil Dead, I decided it was better to take my chances with the felines in the woods.

You get the picture.

The town itself has a couple of conveniences for people either living or visiting here. There is a grocery store (Overwaitea...I'm not kidding, that's the actual name of it), an A&W, a couple of movie rental places, a government liquor store as well as three private "Cold Beer & Wine" stores, and 4 restaurants of varying quality. My advice for dining out is to go to Sporty's on Market Street. Not only is the food decent and the ambience very nice, but it's also the only joint in town that hasn't been closed once a year by the health authorities!

If you're expecting to find romance in Port Hardy then you're in for disappointment. Assuming that you're a normal person, who showers and has at least a rudimentary sense of style, have no substance abuse problems and have a job, then the available pool of eligible singles here is non-existent. You will have no problems picking up an overweight junky wearing jogging pants and gumboots if that's what you're looking for (this applies to both men and women, gay or straight).

That's not to say that there are no intelligent and attractive people here, it's just that they are all 'spoken for', or they've moved away to Victoria or Vancouver. If you're single I wouldn't advise moving to Port Hardy. Despite a great job and an awesome two-story town house on the beach, I can't hack being single in this town.

For the nature enthusiast Port Hardy is a paradise. There are lots of trails for all levels of hikers and you can find a dozen different geographies packed into the small area. For instance, as you lounge on sandy Storie's Beach you have a great view of the Rocky Mountains on the mainland across the sea (about 40 km away), a primevel rainforest at your back, and several river valleys dotted around the area loaded with elk, deer, bears, and cougars. Around the industrial fish plants you will find boats and sea lions and from the shore you can spot the occasional humpback whale or pod of orcas.

The weather is PERFECT from about May until September, but then the rainy season hits and it doesn't stop raining until the following May! In December and January it usually snows for a couple of days but then the rain washes it all away. There's none of that -40 C weather common to Ottawa and Edmonton and Saskatoon, nor does the thermometre ever go above +25 C in the summer. Personally I don't like extreme heat and the fact that in the middle of August I'm still tucked into blankets at night is very nice. The beautiful and perfect summers come at a cost, however, because after September you won't be spending much time outdoors.

The people here are friendly and despite their rough exteriors they are quite intelligent. There is a certain fatalist sense of humour common to the locals and when I first moved here two years ago I couldn't understand it but now I find that the local people really crack me up.

Living and working in a community for an extended amount of time is the best way to get to know locals and I have to give the people of the North Island a lot of respect. As a rule and not just a generalization the people of the area are hard-working, honest, friendly, and quirky. I have never felt threatened nor have I ever feared that I would be ripped off. In fact of everyone I know in Port Hardy I can say with conviction that I trust them more than I trust some of my own acquaintances back in Ontario. These people display some of the best qualities of personality and values I have come across during my travels of the world. Just don't expect good customer service!

That's the nuts and bolts of Port Hardy.
Posted by Nate Drescher at 3:35 PM

Join Me On Google+